St Francis of Assisi (1161-1226) was the son of a wealthy cloth merchant. he lived at a time when church and state were undergoing a major upheaval, not too dissimilar to the world today. The gap between the rich and poor was widening and the church’s response was being questioned by people like St Francis and his followers. He asked God for guidance.
in the small church os San Damiano Francis heard the words of God, asking him to set out and repair not only the church but the world.
St Francis read the words of God,’Go sell everything, give it to the poor and you shall have treasures in heaven.
Franciscans today continue the call of Christ to give to those who have least among us. All Franciscans are called to serve God and Humanity.
For some, this means being admitted as a Companion to the Society of Saint Francis.
Every person admitted as a Companion will receive a free Companion’s Cross. The Cross is in the shape of two crossed arms over a Tau Cross, which is a symbol of Franciscans. Francis used the Tau Cross as part of his signature.
The two crossed hands depict the wounds of the Crucifixion.One is depicted as a bare arm, which is the Hand od Christ. The other, an arm with a sleeve, is the hand of Francis, who is said to have received the wounds of Christ, the Stigmata on Mt La Verna, in 1224, two years before his death. 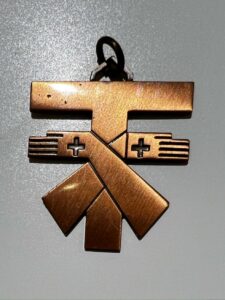 The Cross of the Companion to St Francis. 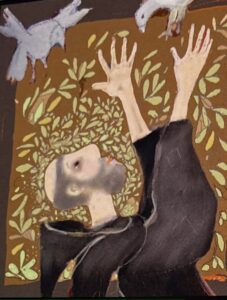